We Survived (with a little help from a friend) 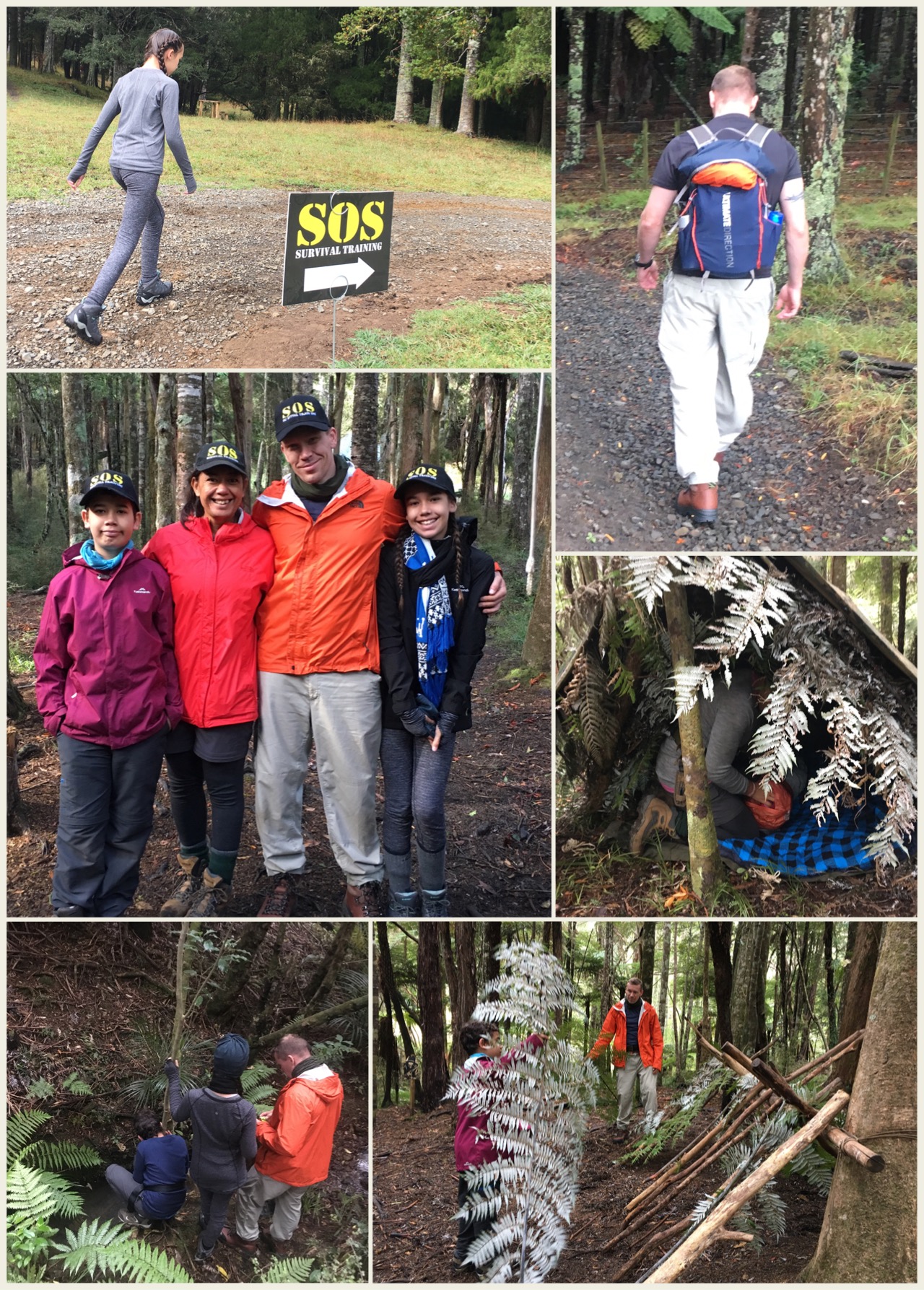 The boys in our house aren’t huge fans of camping, but my baby does like to play with sticks and build shit, so when I asked him if he’d like to build a hut and sleep in the forest for the night – he was all over it! Even James thought it would be fun .. Isabelle on the other hand (who is my “go to” camping companion) wasn’t that keen – but after a good nights sleep she came around to the idea, because her FOMO was bigger than her fear of bugs. 😉

So before anyone could change their minds I fired through an email to Stu at SOS Training and booked us in for an overnight Family Bush Survival course. The first available time slot they had was four weeks away and Elias excitedly counted down the weeks/days/hours – even the forecast of rain didn’t dampen (no pun intended) his spirits, after all that’s what we have raincoats for.

The course is held on private land in Murawai and Stu (our instructor) collected our gear and transported it to the site while we took the option to walk in. The training ground has a large sheltered area with a fire pit and seating, which I guess is “the classroom” and thankfully a beautifully clean and non smelly toilet! (It’s the small things … ) 😉

After the general intro, Stu issued each of us with a knife and we went over how use it in a survival setting, this included how to split wood into kindling, how to make feather sticks and how to make curls, this (along with our lesson on using a flint) would allow us to make a fire, for warmth and signalling purposes.

Next up was one my favorite lessons – knot tying – perhaps because (to me) it was the most useful, just last weekend, I managed to add the guy lines on our new tent. Isabelle is excited because I could now (probably) string a hammock too, she’s dying to add one to our camping pack. 😉

And knot tying was the perfect segue into shelter building because we had to make a start on those sooner rather than later as we were going to spend the night in them. To save us from having to build a castle, we split up into pairs (girls/guys) allowing us to make smaller shelters.

Isabelle and I got stuck straight into it, while the Nash boys walked around in circles and discussed their options. Stu said that was completely normal, girls always just get stuck in and get it done whereas the male species think big and discuss things. We both got there in the end though and I guess that’s all that counts.

After dinner we all crawled into our shelters and settled in for the night – Elias apparently konked out in 2 seconds although to be fair it had been a long day! Isabelle on the other hand found sharing her space with bugs more than a little disconcerting so much so that she would rather have suffocated by covering her entire body and face than risk a bug landing on her lolol – suffice to say although hut building was second highest on her cool things I did at SOS training – hut sleeping was way down the list.

Actually speaking of cool things I did at SOS here’s how our family broke it down;

THE BEST PART OF SOS TRAINING

I also found our talk on water purification amazing – did you know you can make sea water drinkable? I’m not sure Samuel Coleridge did ..