TAUPO – THAT TIME WE SWAM IN A THUNDERSTORM 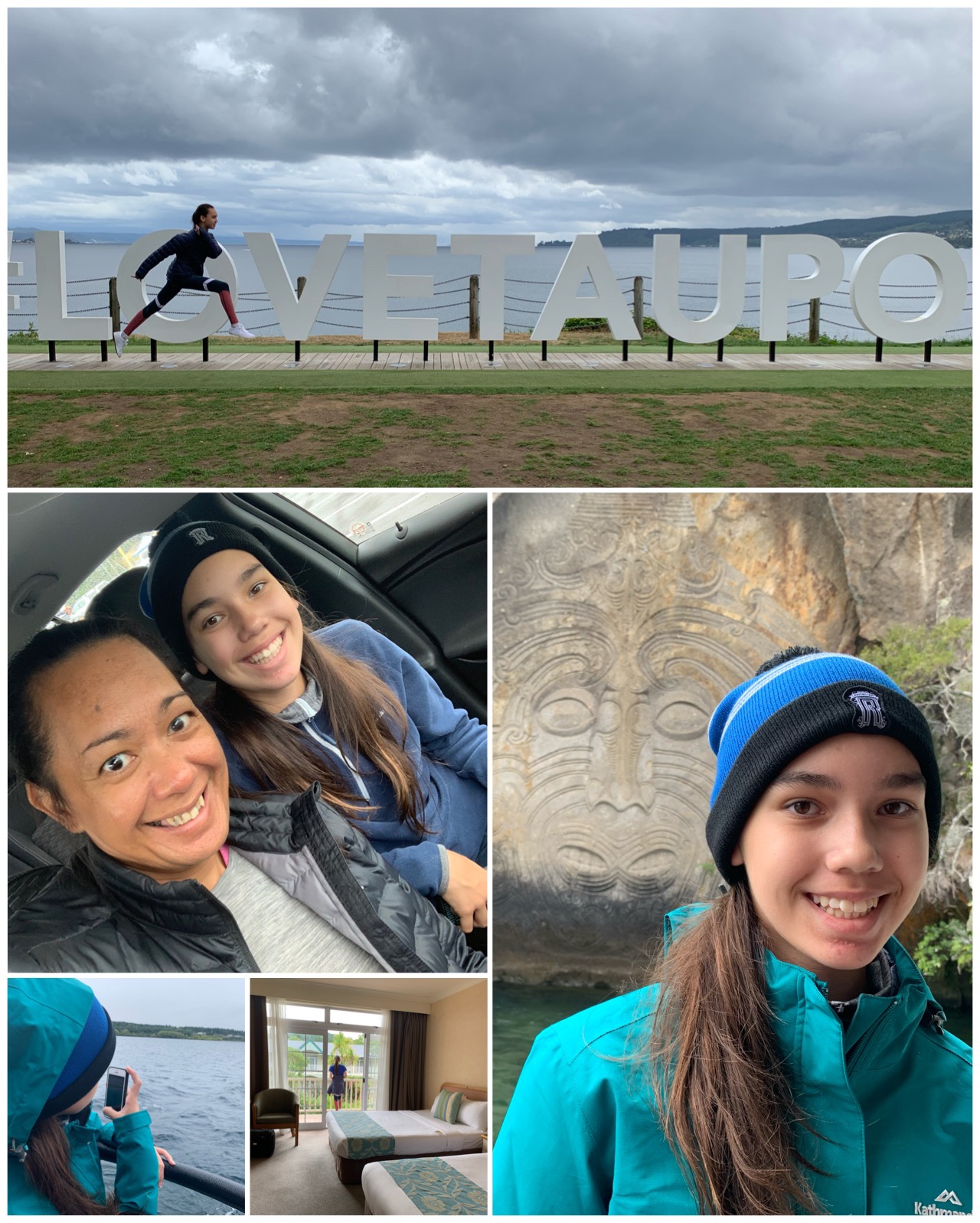 Taupo was another spur of the moment decision and although we had both been to Taupo before, Isabelle was 7, so doesn’t remember a whole lot about her visit other than there were two pools (and lots of bunnies) at our hotel complex and that she learned how to hula hoop there.

I on the other hand, do remember visiting but I have only ever visited for a reason (a body building show, attending Wanderlust (which is where Isabelle learned how to hoop) and that time I ran around the lake) so I wasn’t really sure what we would do while we were there other than look at a large body of water and since we were staying at the same resort, swim in the pool.

We consulted Google (as you do) and settled on a cruise to see the Maori Carvings on the cutest boat EVER and we found that they have an indoor climbing wall, which was fabulous as the weather forecast was looking pretty dodgy for our visit.

As we had decided to stay at Wairakei Thermal Resort, we needed a car, so we flew in, picked up our rental (from the absolute smallest airport we have ever encountered – honestly I’m pretty sure the airport on Great Barrier Island was bigger?!?! Well, the building at least, I’m guessing the actual runway is bigger) but I digress ..

The weather forecast was for thunderstorms in the afternoon, so we went straight to the cutest little boat in Taupo and booked in for the cruise to see the Maori Carvings. It seems to be an activity for the “older folk” with Miss 12 being one of only 2 kids on the boat – or it could just be that us “oldies” don’t mind a bit of rain.

It wasn’t actually too bad – we sat outside on the way to the carvings, which meant we got the best view when we arrived and it only started to rain on our way back (which is when we went indoors to find a seat). By the time we arrived back at the wharf it was nearing lunchtime so we went a (quite literally) hop, step and jump to the city centre and found somewhere to eat before venturing off to find the climbing gym.

We were actually really lucky the wall was open on the day we visited as it doesn’t operate everyday. (We were also lucky to get indoors just as the heavens opened up!) The Edge is located inside the AC Baths which houses swimming pools, a fitness center and an indoor basketball/sports arena, which is where the climbing wall is located (which is a bit odd, but, you know, whatever works) and although it’s not large, it kept Miss 12 occupied for a good 4 1/2 hours – which was perfect on a pretty shitty (weather wise) afternoon.

As the gym was closing up, we went and checked in at our hotel, found food (which ended up being all the way back in town where we had just come from *sigh*) and then decided, that as it had been clear for a number of hours that we’d hit the pool (which I actually remember being warmer last time we went, but once I was in, it was too bad).

We had probably been in the pool for 5 minutes when the first bolt of lightning flashed across the sky – hmm well I can’t hear thunder, that storm must be miles away – then the next bolt of lighting (but still no thunder) .  Isabelle was getting worried, even after I explained that the lightning would hit a tree before it would ever strike us.

Then the heavens opened up and the rain pelted down – I figured we were wet anyway, but Isabelle wasn’t having any of it – she wasn’t keen on all the trees around us being hit by lighting and squashing us (omg the imagination of this child … ) so we then have to run across the complex as the pool we went to was on the other side while being pelted by giant drops of ran!  Honestly, I’ve never run so far without stopping or laughed so hard ..

And that’s why in years to come we will always know the answer to  “where where we that time we went swimming in a thunderstorm?”