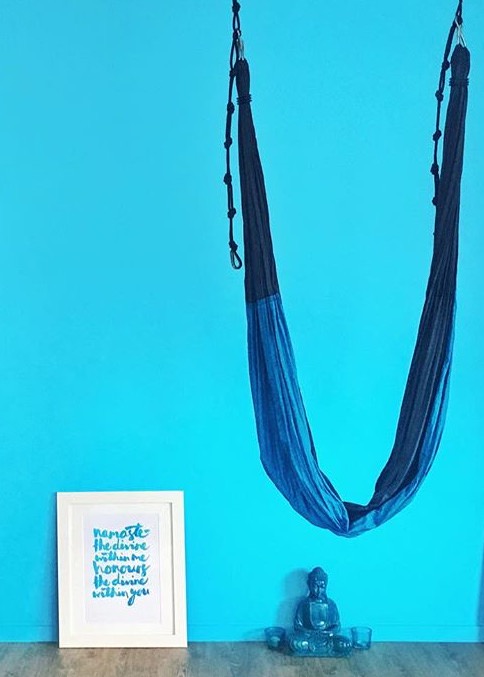 With my “Have Less – Do More” philosophy firmly in mind, this year instead of asking for *stuff* I planned to fill my birth month with experiences.

The first event on my birthday calendar was to be an Aerial Yoga Workshop at Raw Yoga in Milford.

Workshops are awesome as they tend to be able to delve deeper into poses as you have more time and for someone like me, who generally just likes to play around and learn new (and invariably instagram worthy) tricks a workshop is a super fun way to spend an afternoon especially when the weather outside is super shite and you can’t do much else anyway.

Speaking of the weather, although the workshop was fully booked we initially only had 6 attendees – 7 people stayed away because of some rain?!?!  Who does that?!?!  Although I guess it was rather fortuitous for the four girls who just turned up – out of the blue (slightly late) – they looked like they had a great time (and if you look really closely at the first video you might just spot me getting my ninja on).

Our workshop was lead by Nicole and John Allen (yay for having two spotters!).  Nicole started the workshop off leading us through some floor work where the hammock was used as a prop and then taking us off the floor and into the hammock where we worked our way through a series of back bends, various inversions and some pretty tricky looking flips (which I didn’t attempt – after all I’ve got to leave something to aim for next time) 😉

John then took over and led us through flips that seemed to be more upper body dominant, in that you held onto the hammock while flipping, as opposed to the hammock being wrapped around your legs while you flipped which the rest of class had done with Nicole.  I actually preferred to flip while holding onto the hammock as I’m used to taking my weight through my hands because I handstand so often.  John also led us through some static (as you can get in a swinging rig) holds – which is where my complete lack of any strength training lately  severely showed, Ninja Kicks (my fave) and the most blissful Shavasana ever.

As I haven’t done any aerial yoga, pulled myself up on a bar or hoisted any weights (heavy or otherwise) above my head lately my muscles definitely told me (for days afterwards) that we had quite an intense workout AND I certainly worked up a sweat especially during the second section of the workshop where we did lots of inverted holds and flips!   In fact is it a worry that the “easiest” section of the class was plank tucks into a crow hold?  Although I must say the fact that I could still get into a crow from the hammock was quite the highlight – I’ve still (kind of, in a really weak way) got it. 😉

I’m keen to continue going to Aerial Yoga on a more regular basis and even keener (is that even a word?) to go to the next Aerial Yoga Workshop on Sunday 23rd September which incidentally is kind of close to James’ birthday, perhaps it could be a birthday tradition?  I mean even if he doesn’t want to celebrate by flipping himself around in a hammock, I’m keen to take one for the team and celebrate his arrival in the world with some sweat and heavy breathing.  😉