Since October 2017 when a Rahui was placed over the Waitakere Ranges my trail running exploits have been few and far between.

As the Waitakere Ranges are basically my backyard, it was easy to call into any number of trail heads on my way home from work, bust out a “quick” run and still get home in time to spend the afternoon with my kids.  They say, you don’t know how good you’ve got it till it’s gone, but believe you me, as soon as the Waitakere Ranges were no longer an option I realised just how very fortunate I had been to have the entire Ranges as my treadmill. 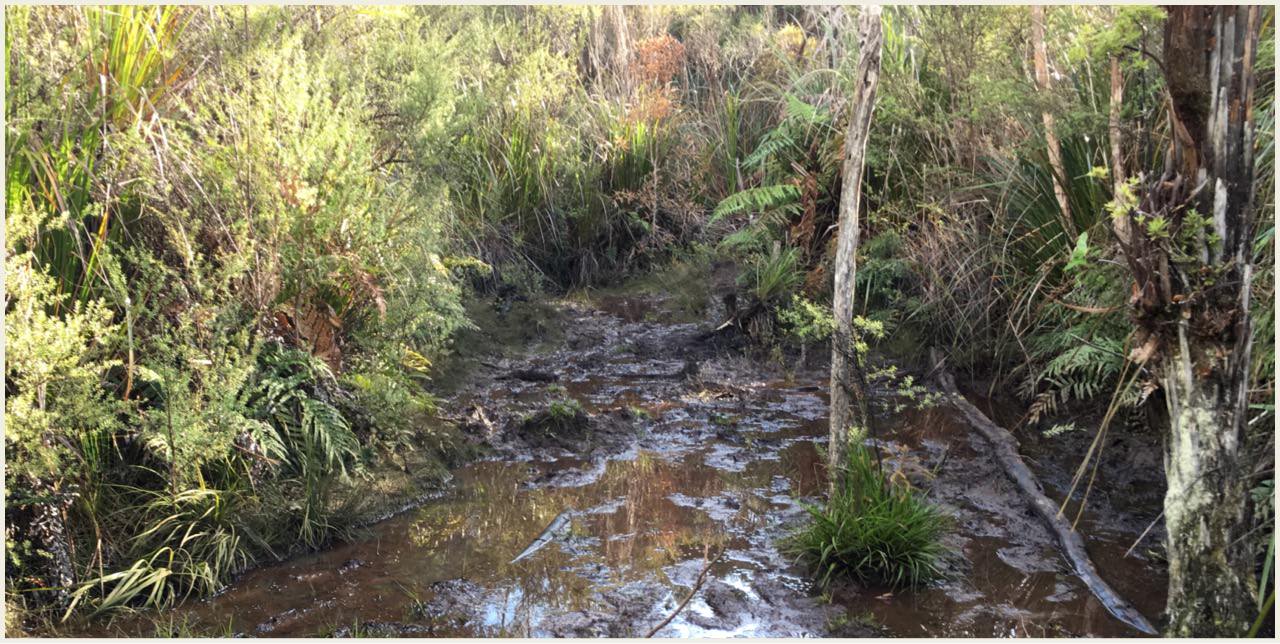 A trail in the (somewhat water logged) Waitakere Ranges

Since the Rahui I settled for the occasional jaunt along the Te Henga Walkway (which has become even busier than usual as it’s one of the very few tracks in the Ranges that are not covered by the Rahui)  or (when I couldn’t face hills) I’d cross the road and run down to Lake Wainamu.  Both are nice enough places to run – the views are quite phenomenal but I missed being in the forest a fact that was made abundantly clear to me when we all ran the Riverhead Rampage.

I can actually access most of the entrances into the Riverhead Forest in less time than it would take me to get to any of the trails in the Waitakere Ranges BUT it’s far less user friendly,  all that I’d ever heard about Riverhead Forest from other trail runners involved people getting lost .. (repeatedly). You see there are no “fancy” wooden trail makers here – all you’ll find are paper cards the Waitakere Motorcycle Club has attached to pine trees throughout the forest and those (obviously) only mark out the Motorcycle Club’s trails.  My first recommendation for anyone exploring the area is to have a map on hand! 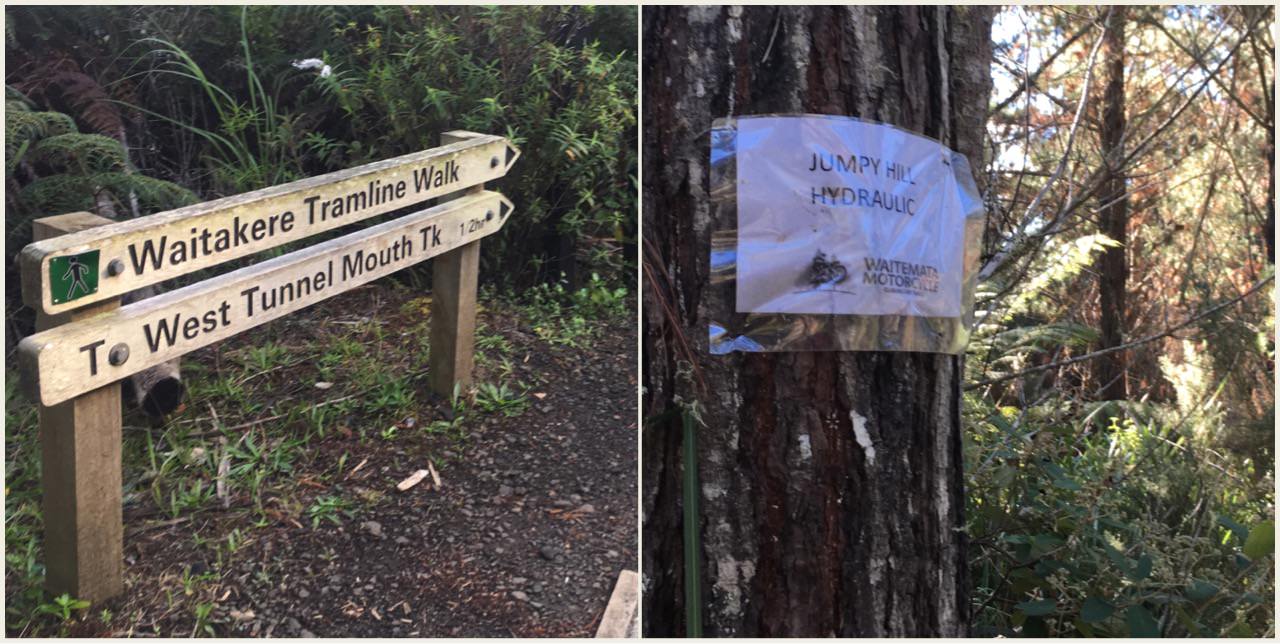 The first time I ventured solo into the Riverhead Forest I chose what looked to be a short easy loop using a topo map app on my phone.  I’d looked at the map earlier in the day when I was planning my visit so I knew the trail I was looking for would be on my right as I went along the gated forestry road.  As I was unfamiliar with the area I’d check the map whenever I’d see a trail on my right, which was quite fortuitous as the “road” I was looking for ended up being anything but a road. 😉

A few days later I started at the same place and used the Trail Forks app (designed for mountain bikers) so that I could venture further “off the beaten path”.   I will say that until you are familiar with the area, you’d definitely want to be using some kind of app to track your whereabouts in the forest as quite frankly there are sections of the pine forest where it’s hard to determine where the trail goes, although a tip to the newbies is to look for the rutted areas up ahead (as the ruts are made by motorcycles). 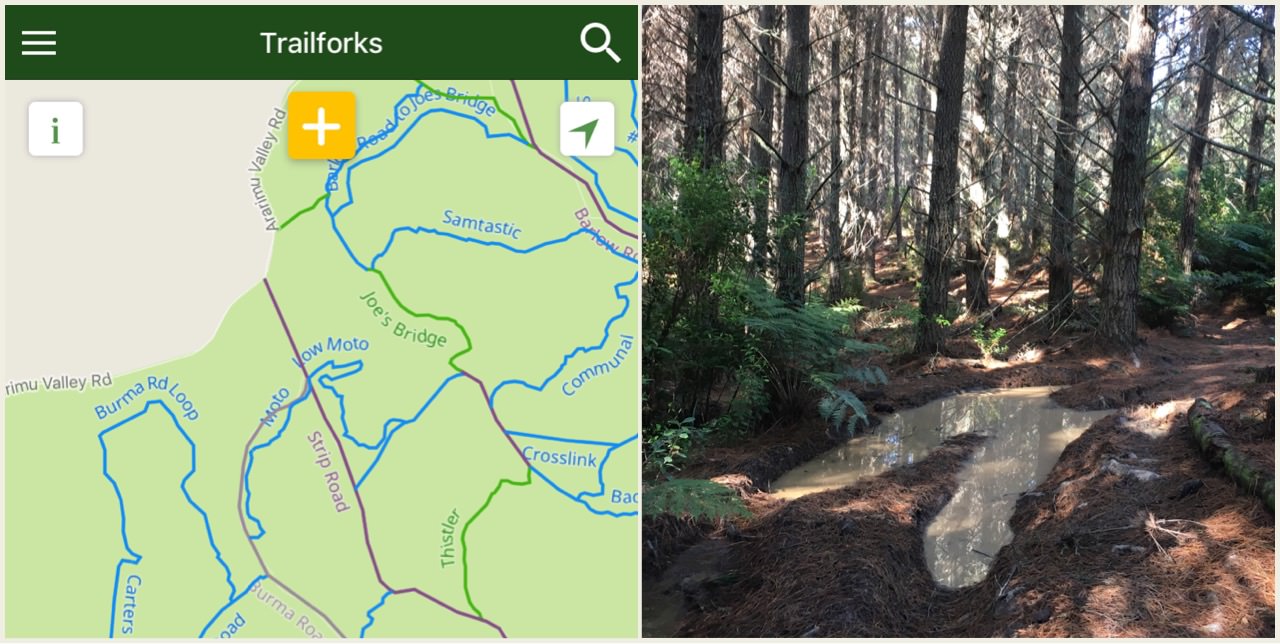 I’m still very unfamiliar with the area and the sound of gunshots (there is a firing range in the forest) and coming across packs of “marauding” dogs (dogs are allowed off leash in the forest and apparently it’s THE place for dog people) can be a little disconcerting, but I just remind myself that I started out a little unsure when I first turned up at the Waitakere Ranges and apart from the few times I nearly falling off cliff faces that worked out ok .. 😉

One thing is for sure – it’s an amazing feeling to have mud under my feet and a canopy of trees over my head again.

Till next time
(I’ll keep exploring)